".... Near the forks of the Grand River in present-day Perkins County, in August 1823, while scouting alone for game for the expedition's larder, Glass surprised a grizzly bear mother with her two cubs. Before he could fire his rifle, the bear charged, picked him up, and threw him to the ground. Glass got up, grappled for his knife, and fought back, stabbing the animal repeatedly as the grizzly raked him time and again with her claws.

Glass managed to kill the bear with help from his trapping partners, Fitzgerald and Bridger, but was left badly mauled and unconscious. Henry became convinced the man would not survive his injuries.

Henry asked for two volunteers to stay with Glass until he died, and then bury him. Bridger (then 17 years old) and Fitzgerald stepped forward, and as the rest of the party moved on, began digging his grave. Later claiming that they were interrupted in the task by an attack by "Arikaree" Indians, the pair grabbed Glass's rifle, knife, and other equipment, and took flight.

Bridger and Fitzgerald incorrectly reported to Henry that Glass had died.

Despite his injuries, Glass regained consciousness. He did so only to find himself abandoned, without weapons or equipment, suffering from a broken leg, the cuts on his back exposing bare ribs, and all his wounds festering. Glass lay mutilated and alone, more than 200 mi (320 km) from the nearest settlement at Fort Kiowa on the Missouri.

"In one of the more remarkable treks known to history,
Glass set his own leg, wrapped himself in the bear hide
his companions had placed over him as a shroud,
and began crawling. To prevent gangrene,
Glass laid his wounded back on a rotting log
and let the maggots eat the dead flesh."
Deciding that following the Grand River would be too dangerous because of hostile Native Americans, Glass crawled overland south toward the Cheyenne River. It took him six weeks to reach it.

Glass survived mostly on wild berries and roots. On one occasion he was able to drive two wolves from a downed bison calf, and feast on the meat. Reaching the Cheyenne, he fashioned a crude raft and floated down the river, navigating using the prominent Thunder Butte landmark. Aided by friendly natives who sewed a bear hide to his back to cover the exposed wounds as well as providing him with food and a couple of weapons to defend himself, Glass eventually reached the safety of Fort Kiowa.

After a long recuperation, Glass set out to track down and avenge himself against Bridger and Fitzgerald. When he found Bridger, on the Yellowstone near the mouth of the Bighorn River, Glass spared him, purportedly because of Bridger's youth. When he found Fitzgerald, he discovered that Fitzgerald had joined the United States Army, Glass purportedly restrained himself because the consequence of killing a U.S. soldier was death. However, he did recover his lost rifle.
Arikara Encounter

Glass, along with 4 others, was dispatched by Ashley to find a new trapping route, by going up the Powder River, then across and down the Platte to the bluffs. The party set off in a bullboat. Near the junction with the Laramie River, they discovered some 38 Indian lodges, with several Indians on the shore. The Indians appeared to be friendly, and the trappers initially believed them to be Pawnees. After going ashore and dining with the Indians, Glass discovered that the Indians actually belonged to the Arikara nation, who, after several past encounters, were anything but friendly with the whites. The party quickly got in the bull boat and paddled for the far shore. The Indians promptly swam in after them and both reached the shore around the same time. Two men, Marsh and Dutton, escaped and reunited later, but the other two, More and Chapman, were quickly overtaken and killed. Glass was lucky enough to find a group of rocks to hide behind, and was not discovered by the Arikaras. Glass also found his knife and flint in his shot pouch after the ordeal. He fell in with a party of Sioux and traveled with them back to Fort Kiowa.

Glass' survival odyssey has been recounted in numerous books. A monument to Glass now stands near the site of his mauling on the southern shore of Shadehill Reservoir on the forks of the Grand River.

Glass would again return to the frontier as a trapper and fur trader. Later he was employed as a hunter for the garrison at Fort Union. He was killed with two fellow trappers in the winter of 1833 on the Yellowstone River in an attack by the Arikara."

Email ThisBlogThis!Share to TwitterShare to FacebookShare to Pinterest
Labels: books

#EclosBeauty Review and Giveaway - Which Product Would YOU Like to Win?

CONTEST IS NOW CLOSED.  THANKS FOR ENTERING!
DENA (DENS): Random Number Generator chose your entry but your profile does not link to your email. Please contact me within 24 hours at the email link in the About Me page. Thanks Chica!
This is a Sponsored post written by me on behalf of éclos Skin Care for SocialSpark. All opinions are 100% mine.

This week I've been using a product sent to me to review, called éclos Skin Care.

I received a kit with small sample sized products of the follow items;

I didn't use the uber-cool terry cloth head band, but have used the products over the past week and part of the review is that I am required to post before and after photos. (Which I'm not crazy about!).

I don't think the photos are a good indication of the products however, as it's only been one week and although I didn't see a difference, I felt it.

My personal favorite item (and one that I will be happy to continue to purchase) is the Instance Radiance Facial Scrub.  I really did love the scrub and looked forward to using it each time.  Its gritty texture coupled with an instant heat left my skin tingling and I felt like it was accomplishing something.  I also liked the Restorative Eye Cream.  Those were two top favorites.

éclos is mainstreaming the ability to make this type of product available at stores other than high end beauty boutiques.  It's a fraction of the cost and easier to find; available at your local GNC, Ulta, Rite-Aid, and more.  Now, for the exciting part!  A GIVEAWAY.

They have provided me with one kit exactly like the one I received, in order to give it away to one lucky reader.  All you need to do to enter to win is post in your comment which product you are most excited to try.  That's it!

Comment Below to Win a Kit with All the Products Listed Above.

1 winner chosen at random from the comments.

Please be sure your email is connected to your user name so I have a way of contacting you.

Winners not responding to email within 24 hours forfeit and a new name will be chosen. USA shipping only.

Email ThisBlogThis!Share to TwitterShare to FacebookShare to Pinterest
Labels: contest 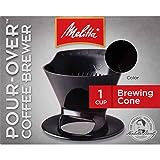 - when you want to brew fresh tasting coffee one cup at a time.
Place the filter cone on a coffee cup. Insert a No. 2 Melitta cone filter. Scoop in your favorite coffee to taste. Add hot water, then indulge in a cup of fresh brewed coffee.
2 comments: