The Oster My Blend blender: an individual-sized blender and sport bottle to blend and go 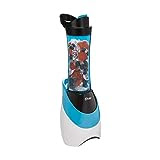 is it's a sports bottle built into the blender so you simply blend, grab and go.  I personally would blend a nice iced coffee drink in this myself!!! 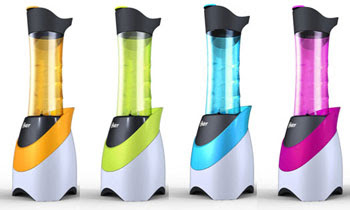 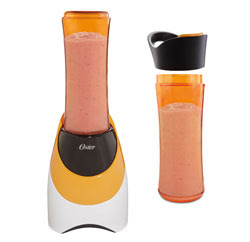 Blend your favorite smoothie or shake right in the sport bottle

A Blender to Fit Your Schedule

The Oster My Blend blender is an individual-sized blender and sport bottle in one that is designed to fit your active, fast-paced lifestyle. With quick and convenient One Touch blending, you can create your favorite smoothies, protein shakes, and more to enjoy at home, on a run, or at the office.
The My Blend is a powerful way to start your day with its 250-watt motor that will pulverize frozen fruit and ice to blend the smoothie of your choice. By blending directly into the sport bottle, you'll have less mess and less to clean up. The drinking lid has a carry hook that makes it easy to take with you as you carry out your day. The stylish 20-ounce BPA-free plastic sport bottle is dishwasher safe and fits in most car cup holders. Storage is simple, as the blender base is small enough to keep on your counter every day.

The easy to use My Blend allows you to personalize the contents of your blended beverage and control the ingredients. Simply fill the My Blend sport bottle with ingredients from your favorite recipe, blend, and go about your

The New Keurig Vue - Is it Worth It? Can K-Cups Be Used in It?

This weekend I found myself wandering the aisles of Best Buy and no matter what I go into the store to purchase (this time it was printer ink) I find myself in the small appliances section.  It's my all-time favorite department to browse.

Having owned Keurig brewers now for about 8 years (?) I am spoiled by the hot, strong, black brewed morning beverage I get verses the coffee grounds in a basket brewers.  I like my Keurig because I can brew it at 6, 8 or 10 oz. depending on the strength I want as well as having my coffee at 192 degrees.  Because I've never been interested in their new Vue system, I've never paid much attention to it.  However, I stood in the aisle this time and inspected the features... which is what prompted today's post.

Direct from the Keurig website: The Keurig® Vue® V700 Brewing System gives you total control to brew your way: stronger, bigger, hotter and with more choices than ever before. With an interactive Touchscreen and revolutionary new Custom Brew Technology™ Vue® ensures every beverage is brewed to perfection, giving you perfect results – every cup, every time. And your choices are nearly limitless. In addition to coffee, tea, hot cocoa and iced beverages, Vue® brews delicious café and specialty beverages as well. Includes a bonus variety of 10 Vue® packs. This product is BPA free.

They make it sound pretty awesome, right?  But I was more interested in comparing it to my K-cup brewing system and scouring the internet to see what others had to say about it.

Let's take a look at some of the "Cons" of the Vue I found online from various sources:

While discussing the Vue with my husband I remarked they must have came out with a new style that is completely incompatible with k-cups, perhaps because there are so many copy-cats on the market now?  Or they've made their kazillion dollars on the K-cup brewers and wanted to make a whole new style for those who have to have something "new" and "different" from everyone else now that the K-cup brewers are so popular and most everyone seems to have one?

But then I read this little gem - I don't know how to verify if it's true or not, but it seemed to be a better explanation as to why they came out with the Vue when the K-cups were already so popular:

"....Keurig really missed the boat on this one. Seems like they were in a hurry to come out with something quick since the patent was expiring on the K-Cups."

Another little gem is for those living in higher altitudes.  Apparently if you live in altitudes over about 6000 - 7000 feet there is an issue of coffee spewing, double streams, and other mishaps.  It was found that if you look at the cups and they are puffed up, you need to simply pierce them with a toothpick or needle to release some of the pressure, then use as usual.  This seems to alleviate the problem.

At this point, I am still content to use my Keurig K-cup brewer as the average $200 price tag for a machine that doesn't seem to do much more than my brewer seems a little steep.  I like my coffee strong, hot and black so the 2 cup powdered milk drinks are not a draw for me personally - and even if they were, I have to say, the Cafe Escapes Caramel drinks do quite nicely in my Keurig K-cup brewer and I'm happy with it.

For those that want the newest and latest however, the Vue seems to be your guy.  A LOT of people on the net are happy with it and it seems to have a consistently high rating among reviewers.  It averaged 4 1/2 out of 5 stars everywhere I checked.

Let's add one thing I do like over the K-cup brewers;   apparently the Vue containers are recyclable.  LOVE that.  Although I've tried to reuse k-cups myself in various ways, it's a pain to cut them open and remove the filter and used grounds and wash them out...  it's a long and messy process.  I'm thankful the Vue cups are able to be recycled but I'm still not ready to jump into the Vue brewer quite yet.  Perhaps by next year though... if the price comes down just a bit to be comparable to the K-cup brewer.

From the kitchen of Seattle's Best Coffee comes an idea I'm not sure I am ready to make.  Now, I love bacon.  I really, really love bacon.  And, I love coffee.  I even love bacon and coffee together for breakfast.  A few strips of crisp bacon and a full mug of strong, black coffee is a perfect breakfast in my book.  But... bacon coffee?  Seattle's Best

Coffee has a new coffee recipe that combines coffee with the unexpected flavors of caramelized bacon and subtle hints of pumpkin pie spice.   What do you think?  (You'll need  Bacon Syrup

- which I guess would be a much faster way to get your bacon flavored coffee but it doesn't seem nearly as rich and decadent as the following recipe.


Brew the coffee with the hot water in a pour-over brewer or coffee hand press; Pour the coffee into a cup. Pour in light cream, bacon flavored syrup, caramel flavored syrup and pumpkin pie spice and stir with a spoon until combined. Top with a dollop of Spiced Caramelized Whipped Cream, drizzle with caramel ice cream topping and sprinkle with a little pumpkin pie spice; Garnish with a strip of caramelized bacon.

In a larger mixer bowl, add all the ingredients; Whip until stiff peaks form. Spoon into a piping bag fitted with a large star tip and set aside until ready to use.


For the Caramelized Bacon

Preheat the oven to 375°F. Line a 9" x 13" pan with parchment paper and cover with a thin layer of light brown sugar.  Layer bacon strips over the brown sugar; Pat additional brown sugar over the bacon to cover and top with a second piece of parchment paper. Bake the bacon for 15 to 20 minutes, or until brown and bubbling. Remove to wire rack and cool completely 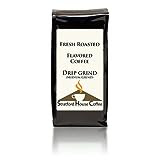 Coffee Themed Decor for the Kitchen or Home

As I'm sitting here sipping my coffee this morning I asked myself;  What coffee should I review today?  And suddenly the imagine of the coffee prints I have in my kitchen came to mind and I thought;  "I've never posted about coffee decor!"

Yes, my kitchen has a coffee theme.  Not an 'in your face' kind of theme, as I am someone who thinks 'simplicity' and "less is more" is a good way to live.  And decorate.  In my kitchen and dining area I have 3 framed prints on the walls.  Just three;  all different coffee drinks with their name artistically printed on them.  I love them and they were the basis for the colors I chose to use in my kitchen as well.   So today's post is in honor of coffee and coffee themed decor.

This 8X10 inch retro print is one you can hang as is, or choose to frame yourself to match your home decor.    See it here:  Retro Coffee Set by N. Harbick 8"x10" Art Print Poster

This 100% cotton quilt fabric is perfect for those who want to add just a little more to their kitchen or dining room by sewing (or having sewn) a vintage look curtain or perhaps just add a valance to their window.  I also like the coffee themed fabrics for things like homemade aprons, embellishing plain kitchen towels with a strip sewn across the top, or you can use it to cover photo albums and make them into recipe books.  So many ideas!

Although the vintage tin sign and fabric isn't really my personal style - framed prints are.  This is a set of 4 I found on Amazon that not only come in a matching set of 4 different designs, but are already framed and ready to hang.